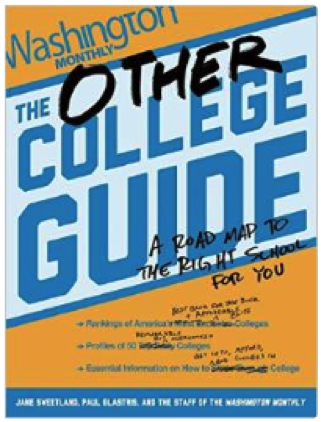 NEW YORK, NY- April 7, 2015 -- A new guide to choosing a college gives Baruch College top honors in its region as providing the “Best Bang for the Buck” for 2015. Baruch also ranked 26th on a list of “Affordable Elite” schools, and is one of 50 profiled as “Great but Overlooked Schools.”

The new book, titled The OTHER College Guide, is from the editors of Washington Monthly, and incorporates and expands on the rankings published by the magazine for the past several years.

“The guide ranks schools based on the best available data on what really matters: which schools will charge you a fair price and not bury you in debt? Which help students graduate? Which provide degrees that allow you to earn a decent income?”

Baruch was ranked #1 in Bang for the Buck in the Northeast region, followed by Rutgers University and three other CUNY colleges -- Lehman College, John Jay College of Criminal Justice and Queens College.

Baruch was one of 224 colleges nationally designated as “elite,” or highly selective. These schools were ranked on affordability based on “net price of attendance” after taking grants and scholarships into account, and Baruch ranked 26th.

The book provides profiles of only 50 schools, including Baruch, in a section titled “50 Schools You Should Know About.” No other school in New York City was profiled, and the only other in the state was SUNY-Buffalo. An excerpt from Baruch’s profile:

“In the city that never sleeps, students have access to world-class writers and performers who offer master classes, lectures, readings, workshops, and concert series right on campus.”

In determining the Best Bang for the Buck, the authors divided more than 1,500 colleges and universities into five geographic regions -- there was no national ranking. The authors calculated scores for each school based on a variety of value-based measures, including:

Baruch College is a senior college in the City University of New York (CUNY) with a total enrollment of more than 18,000 students, who represent 160 countries and speak more than 100 languages. Ranked among the top 15% of U.S. colleges and the No. 5 public regional university, Baruch College is regularly recognized as among the most ethnically diverse colleges in the country. As a public institution with a tradition of academic excellence, Baruch College offers accessibility and opportunity for students from every corner of New York City and from around the world. For more about Baruch College, go to http://www.baruch.cuny.edu/.