First place in three out of the last five years 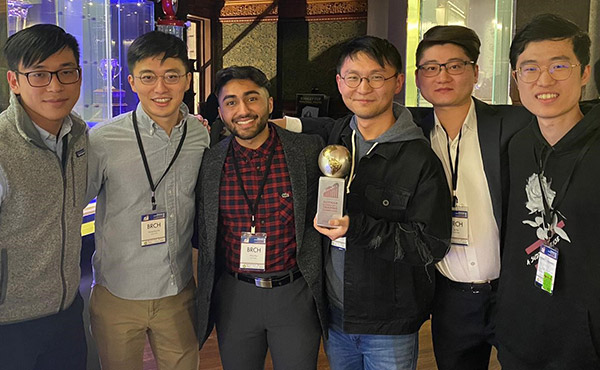 Baruch College’s dominance at the 2020 Rotman International Trading Competition (RITC) was on display again, as a team of students from the Master of Financial Engineering program finished in first place at this year’s event held on Feb. 20-22 at the University of Toronto.

Baruch has won the RITC three times in the last five years. Since this annual event began 17 years ago, Baruch earned first place on four occasions (2017, 2016 and 2012).

The 2020 RITC featured 47 colleges and universities across North America, Europe, Asia, and Australia, including Carnegie Mellon, Duke, MIT, Stanford, and UC Berkeley. The Baruch team placed first in the volatility trading and electricity trading cases, as well as second and fourth, respectively, in the commodities trading and algorithmic trading cases.

“This year’s team demonstrated amazing teamwork and dedication. Everyone contributed to strategy, analysis, and preparation,” said Jarrod Pickens, PhD, lecturer in the Weissman School of Arts and Sciences department of mathematics, who is in his fifth year coaching the team.

Pickens added, “I think our students do so well due to the interdisciplinary nature of their programs,” citing that Baruch team members have taken classes in math, programming, and finance. Students were able to enact their strategies while also adapting to changing and adverse market conditions.”

Hear from the Winning Students

The 2020 RITC was Raymond Wong’s third time competing at this event, and his second win. A master’s student in quantitative methods and modeling who will graduate in May, Wong spent hours identifying and developing strategies, practicing for the competition and executing strategies during the actual competition.

“We were faced with some complicated cases that were a little wild and unpredictable,” Wong said. “I was excited that we won and I was able to be part of the winning team once again. It always feels great to accomplish something you set out to do and actually achieve it.”

Qian Sun (’20), a financial engineering major, participated at RITC for the first time. Sun prepared by practicing all the cases, modifying support sheets and algorithms needed for all the cases, and communicating with teammates and coach Pickens.

“The biggest challenges were to allocate our time efficiently, settle on the strategies for all the cases, and execute them flawlessly,” Sun said in an email.

For Yuanxin (Kevin) Zheng (’20), the hardest aspect of RITC is that the “volatility of the market is higher in the real competition compared to the practice one, which requires that we have to make decisions and react quicker.”

Bin Zhu (’21) prepped for his first competition by using the derivative knowledge he learned in class: “I was nervous at the beginning, but thanks to all my team members and advisor, we made it at the end!”