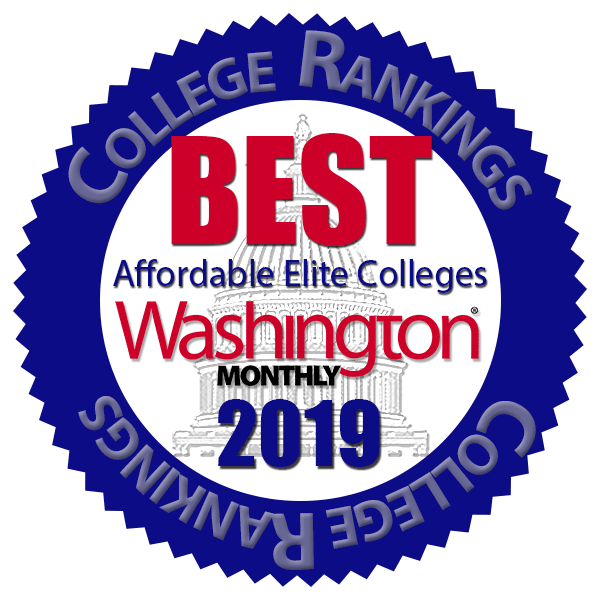 Baruch College earned the #1 ranking on the “Best Affordable Elite Colleges” 2019 list released by Washington Monthly, and placed #3 in the “Best Bang for the Buck” Colleges: Northeast category.

Washington Monthly attributed both of these high rankings to Baruch’s social mobility success of moving students up the income ladder, from the lowest economic rung to the middle-class and beyond.

According to Washington Monthly, a “top 50 ranking is a great starting point for any high-achieving student looking for a college that will provide a great education while improving—not sandbagging—their financial prospects.”

Washington Monthly published its “Best Affordable Elite Colleges” list for the first time in five years with Baruch claiming the top spot among 208 of the most selective institutions in the country, as identified in Barron’s Profiles of American Colleges.

Each university on this list received an evaluation based on its net price and students’ future earnings. Washington Monthly said these metrics “track how well they promote income equality and upward social mobility.”

When talking about Baruch, Washington Monthly noted the College “produces good outcomes for students for an incredibly low price—where, in fact, Pell Grant-eligible students are an amazing 8% more likely to graduate than other students.”

Baruch placed #3 for “Best Bang for the Buck” colleges in the Northeast—representing a jump of 11 positions from last year’s ranking. This list ranked 386 public and private institutions according to how well a school helps non-wealthy students attain marketable degrees at affordable prices.

For the first time in calculating this ranking, Washington Monthly looked at the number of Pell recipients who successfully earned bachelor degrees, compared to just the percentage of students receiving the grants at each school.

According to Washington Monthly, this adjustment was made to” reward colleges that provide access to higher education to more of the low-income Americans who need it.”

When talking about Baruch, Washington Monthly noted that “half of Baruch’s enrollment is composed of first-generation students, continuing CUNY’s historic role as a vector of upward mobility for immigrants to New York City.”

Washington Monthly ranked four-year schools  based on their contributions to the public good and to “call attention to colleges that serve the best interests of the country as a whole—including by enrolling and graduating students of modest means.” A detailed explanation of the methodology is available within each individual ranking.