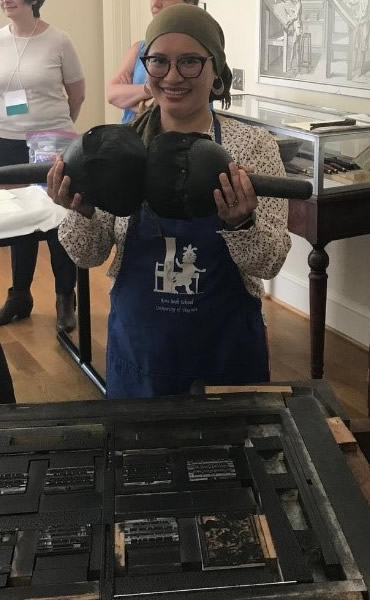 Professor Rianne Subijanto, shown here practicing printing with an 18th century Common Press at the University of Virginia, intends to use the fellowship to enrich her students’ learning at Baruch College.

Rianne Subijanto, PhD, an Assistant Professor in the Department of Communication Studies at Baruch College’s Weissman School of Arts and Sciences, was awarded a two-year fellowship to join the Andrew W. Mellon Society of Fellows in Critical Bibliography at the University of Virginia’s Rare Book School (RBS).

This organization is comprised of scholars working to advance the study of texts, images, and artifacts as material objects through capacious, interdisciplinary scholarship. Each year, 10 junior fellows join the two-year program to take two one-weeklong seminars with RBS's international faculty; afterwards, they have the option to become senior fellows.

These fellows form a community that pursues research involving “a wide array of objects, including printed books, illuminated manuscripts, coins and medals, carved stones, moveable books, digitized newspapers, and photographic archives.” The program emphasizes hands-on trainings along with collaborations and conversations across disciplines.

Dr. Subijanto hopes to use these newly acquired skills in her research and teaching at Baruch College.

Professor Subijanto is specializing in the study of communication technology and social emancipation in the context of Indonesia and Southeast Asia during the colonial period. In this period—early 1900s—underground prints and texts were used to mobilize anticolonial movements in the Dutch East Indies (now Indonesia).

She is currently beginning a second research project on the production of radical media and enlightenment in the Malay world.

While conducting archival research for her book manuscript, “Revolutionary Communication: Enlightenment at the Dawn of Indonesia,” Subijanto read several newspapers, books, pamphlets, and manuscripts produced by the communist anticolonial movements in colonial Indonesia.

This research sparked an interest in the field of book history and the study of the materiality of texts as she began exploring how the activists produced these texts under conditions of surveillance and heavy repressions by the Dutch colonial government? Where did they acquire the printing technology, the papers, the ink, etc.? How did they learn the skills needed to use the technology and to produce the texts?

As part of the program, Subijanto will attend bibliographical field school, which occurs every fall in New York City. Fellows visit major special collections, antiquarian bookstores, conservation labs, auction houses, and private collections. Excited to attend this three-day event, Subijanto intends to bring her students to these sites as part of their studies.

As a junior fellow, she will also receive funding to host a symposium on topics related to critical bibliography at Baruch College.

“Joining the Andrew W. Mellon Society of Fellow in Critical Bibliography expands my research and teaching skills on the materiality of texts and book history,” Subijanto said. “Through my participation in the fellowship, I will strive to expand my pedagogy in my courses at Baruch College. I hope to engage our students with the materiality of book and prints as I raise their awareness on the role of media as an institution of power struggle.”