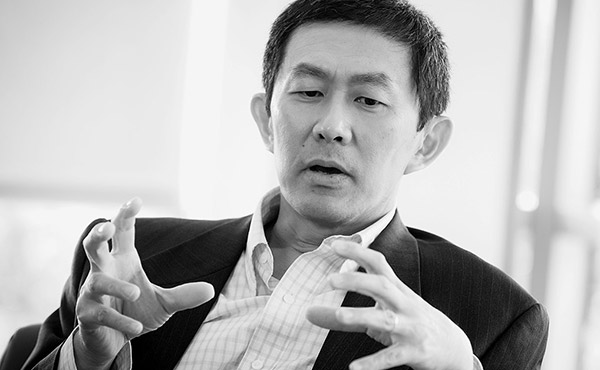 The Board of Trustees of The City University of New York today voted to appoint Dr. S. David Wu, the provost and executive vice president of George Mason University, as the eighth president of Baruch College, one of the nation’s top public colleges.

Under the leadership of Dr. Wu, an accomplished scholar in systems engineering and operations research, George Mason University earned Carnegie tier-one research designation and enjoyed a surge in sponsored awards for research, scholarship and creative work.

President-Designate Wu, who will assume office on July 1, 2020, will be the first Asian-American to serve as president of a CUNY college.

“Dr. Wu is a proven academic leader with an impressive record of achievements,” said Board of Trustees Chairperson William C. Thompson Jr. “His dedication to academic excellence will serve Baruch College and CUNY well. We look forward to the ideas and energy he will bring to the important work of securing Baruch’s continued standing as one of the preeminent institutions of public higher education in the United States.”

Dr. Wu’s appointment to lead one of CUNY’s oldest and best known colleges, serving more than 18,000 students in its three schools, is the first presidential appointment under CUNY Chancellor Felix V. Matos Rodríguez, who took over the helm of the system in May 2019.

“Dr. Wu brings an impressive record of academic leadership and vision to the university,” said Chancellor Matos Rodríguez. “Baruch will benefit tremendously from his skills, energy and insights. We could not be happier that Dr. Wu has chosen to join the CUNY community, or prouder of the historical significance of his appointment.”

“It is a privilege to join this remarkable community and I am both honored and humbled,” said Dr. Wu. “Baruch is one of the most impressive institutions I have encountered in my academic career. The combination of achieving academic excellence at the highest level, while being the most effective agent for social mobility not only makes Baruch a prime example for the founding vision for the CUNY system, but makes Baruch a model for public higher education. On top of academic excellence and social mobility, if you add the incredible location at the center of the world’s most important city, there are truly very few institutions which can compete. I look forward to meeting and working with my colleagues, faculty, and students as we embark on a new journey and write the next chapter of Baruch’s history. I am eager to explore Baruch’s distinctive mix of academic strengths and successes, influential scholars, diverse student body, and invested alumni – together we can continue to build an exceptional model for urban higher education.”

George Mason University, with over 38,000 students and 6,000 academic and administrative staff, is the largest public research university in Virginia. As the school’s provost and executive vice president, Dr. Wu oversees an annual budget of $1.3 billion.

Dr. Wu has played a leading role in the George Mason University’s emergence as a top-tier research institution and has provided leadership for all aspects of the university’s strategic priorities. Mason thrived under Dr. Wu’s leadership, experiencing the fastest enrollment growth in Virginia, increased student diversity and improved academic outcomes. The university became the youngest institution to receive Carnegie tier-one research designation.

Prior to his public university service, he spent his professional career at private research institutions. For over a decade, Dr. Wu served as Dean for the Rossin College of Engineering and held the Lee A. Iacocca Chair at Lehigh University. He led the college’s strategic planning and a major fundraising campaign that stimulated a period of unprecedented expansion and renewal. He led cross-institutional collaborations with the University of Pennsylvania, including a doctoral fellows program with major funding from the National Science Foundation. Dr. Wu is a long-term and current board member of Dartmouth College’s Thayer School. The Board helped to shape a compelling narrative for Dartmouth that embraces innovation as an integral part of liberal arts education.

President-designate Wu succeeds Mitchel B. Wallerstein, PhD, who has served as president since August 2010. During his decade-long leadership, Dr. Wallerstein achieved nationally recognized successes in areas ranging from advancing the social and economic mobility of students, to launching a global education program, to setting records for fundraising, to transforming the physical face of Baruch College with new facilities, renovated spaces, a new student center, and a public pedestrian plaza on East 25th Street.

The search process was conducted by a committee of the CUNY Board of Trustees with representation from faculty, students, alumni and community stakeholders. At the conclusion of an extensive national search, the committee recommended finalists.  Chancellor Matos Rodríguez recommended Dr. Wu to the Board of Trustees for approval.

The City University of New York is the nation’s largest urban public university, a transformative engine of social mobility that is a critical component of the lifeblood of New York City. Founded in 1847 as the nation’s first free public institution of higher education, CUNY today has seven community colleges, 11 senior colleges and seven graduate or professional institutions spread across New York City’s five boroughs, serving 500,000 students and awarding 55,000 degrees each year. CUNY’s mix of quality and affordability propels almost six times as many low-income students into the middle class and beyond as all the Ivy League colleges combined. More than 80 percent of the University’s graduates stay in New York, contributing to all aspects of the city’s economic, civic and cultural life and diversifying the city’s workforce in every sector. CUNY’s graduates and faculty have received many prestigious honors, including 13 Nobel Prizes and 26 MacArthur “Genius” Grants. The University’s historic mission continues to this day: provide a first-rate public education to all students, regardless of means or background.