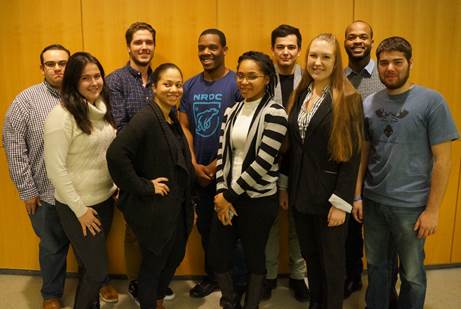 New York, NY - January 5, 2017 - Ten Baruch College undergraduate students, all from the Marxe School of Public and International Affairs, were selected for the highly competitive New York State Legislature Internship program in Albany. The students, who are in the Bachelor of Science in Public Affairs (BSPA) program, will spend the spring 2017 semester working with the State Assembly and State Senate in New York’s capital.

This year, 29 City University of New York students were chosen for this prestigious internship program with Baruch students representing thirty-four percent of the group and coming from such diverse backgrounds as the Dominican Republic, Haiti, Egypt, Russia, Poland, Uzbekistan and the Ukraine. On January 4, Alina Krugovykh (’17), Peter Lewicki (’18), Elsayed Osman (’19), Ahathon Tolibov (’19), and Jolisel Vargas-Lopez (’18) began their internships with the Assembly. Oscar Bruce (’17), Thara Duclosel (’18), Quamid Francis (’18), Paul Gagliardi (’19), and Anna Makogan (’18) will follow on January 12 to intern at the New York State Senate.

From a Former U.S. Marine to an Aspiring Lawyer: Students Aim to Make a Difference

Senior Alina Krugovykh, who plans to study law after graduation, hopes to gain a thorough understanding of the legislative process during her time in Albany. Among her many interests in the field of public affairs are international affairs, education, and immigration. She shares a passion for public education with many of her fellow interns due to her experience in public schools in Russia and New York City. She wants to “help the assembly member make a difference within his or her community.”

Peter Lewicki, a senior and former intern for Congressman Elliot Engel, will use his time in the Assembly to expand his knowledge of a variety of state-wide issues, including community development, social services, and education. He hopes to return to the State legislature after graduation to work either in Albany or a district office. “My end goal is to make changes in peoples’ lives, working to attack specific key issues facing those in need,” said Lewicki.

Oscar Bruce, a senior who plans to obtain a Master of Public Administration degree after completing his BA, will be joining the State Senate to gain valuable experience in public policy and community development. The Brooklyn and Long Island native is also planning to pursue a career in community development, and or arts administration. “The Senate internship will give me the opportunity to learn firsthand what it is like to work in public policy,” said Bruce.

A passion for education policy and public education attracted Junior Thara Duclosel to the NYS Legislature Internship program. She gained a first-hand understanding of the significance of public education while attending New York City public schools after emigrating from Haiti. “I hope to learn more about the complexity of creating and passing effective legislation affecting public school students and ways to provide educational services to our citizens,” says Duclosel. Upon graduation she plans to work for a non-profit dedicated to providing services to children and families.

Quamid Francis, a junior who served in the United States Marine Corps prior to enrolling in Baruch, is currently studying international affairs, education, criminal justice, and community development. Quamid stated that “during my time with the Senate, I hope to gain a deeper understanding of the intricacies of how government works at the state level.”

About the Internship Program:

The State’s internship program is highly competitive with participants selected based on their academic achievement and commitment to public service. Interns are offered an unparalleled opportunity to observe government in action and learn how the legislature operates. Students receive 15 academic credits toward their degree and spend the spring semester in Albany to work in a legislative office and participate in a mock legislative session. Each student also receives a stipend of $7,140 to cover the cost of living in Albany. Legislative interns perform substantive work including, research on state legislation, assistance in drafting bills, constituent services, and other legislative tasks. The public affairs internships are coordinated through Michael Feller, a distinguished lecturer with the Marxe School ofPublic and International Affairs, who meets with the legislative interns throughout the spring semester.