Marxe School of Public and International Affairs Garners #20 Spot Based on Data of 400+ Programs Across the U.S. 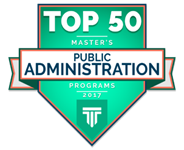 The ranking is based on the most recent data on more than 400 programs across the country, collected from the Network of Schools of Public Policy Affairs, and Administration (NASPAA), the National Center for Education and Statistics, PayScale's Graduate School Salary Report, the Princeton Review, and US News & World Report.

In its ranking of Baruch College, Top Management Degrees notes that the school’s “Master of Public Administration degree, within the highly esteemed Marxe School of Public and International Affairs, is designed to cultivate effective administrative leaders and thoughtful policy analysts within the nonprofit and government sectors.”

It cites that, while Baruch is regionally accredited by the Middle States Commission on Higher Education, the College’s MPA holds an additional NASPAA accreditation. “The college is ranked by US News and World Report as one of the top 50 public affairs schools, and is additionally seen in rankings across the country. Their other awards include US News’ Top Regional Universities, and the Princeton Reviews’ the Best 381 Colleges, Best Northeastern, and “Colleges that Pay You Back.”

The gift to the School-which can trace its beginnings to 1910 and has for decades trained students for careers in government and the nonprofit sectors on the local, state, national and international levels-will elevate its status to compete with the most prestigious programs in the world.

For more information about the Marxe School of Public and International Affairs, go here.

According to Top Management Degrees, the ranking is “designed to find the best on-campus MPA programs available.”  A list of more than 400 programs was developed and then vetted based on six factors: accreditation; affordability; average salary; prestige and awards. For more information, go here.