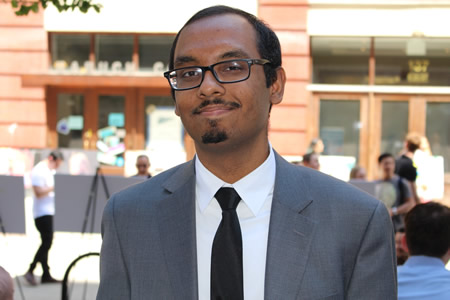 Ishraque, who is graduating in May 2016 with a Bachelor of Science in Public Affairs, will spend the summer studying the language at the American Institute of Indian Studies.

“My goal is to apply my new language abilities and help regions in South Asia that will be afflicted by natural disasters in the future. Bangladesh is specifically prone to this,” says Ishraque. “But I also plan to help in my own community in the same context.”

Ishraque, who was born in Bangladesh and raised in Jackson Heights, Queens, says Bangla is his native tongue but he doesn’t speak the language fluently.

“I have a basic grasp of Bangala but I don’t speak or write it eloquently,” says Ishraque. “The program will help me have a better understanding of my own community - one that has a growing population in the United States at that.”

The CLS Program is part of a U.S. government effort to expand dramatically the number of Americans studying and mastering critical foreign languages. Participants are expected to continue their language studies beyond the scholarship period, and later apply their critical language skills in their future professional careers.

Baruch College is a senior college in the City University of New York (CUNY) with a total enrollment of more than 18,000 students, who represent 164 countries and speak more than 129 languages. Ranked among the top 15% of U.S. colleges and the No. 4 public regional university, Baruch College is regularly recognized as among the most ethnically diverse colleges in the country. As a public institution with a tradition of academic excellence, Baruch College offers accessibility and opportunity for students from every corner of New York City and from around the world.  For more about Baruch College, go to http://www.baruch.cuny.edu/.